Checkout the official forum thread for discussions and announcement of new features.

Issues can be created on GitHub but please read the "Known bugs and workarounds" section in this document before.

If you can confirm it works under other desktop environments, please add it to the list. The section "Known bugs and workarounds" below contains information and workarounds for certain caveats.

Does this launch or bundle Syncthing itself? What about my existing Syncthing installation?

Syncthing Tray does not launch Syncthing itself by default. There should be no interference with your existing Syncthing installation. You might consider different configurations:

The screenshots are not up-to-date.

Qt Widgets based GUI under Openbox/Tint2 with dark Breeze theme 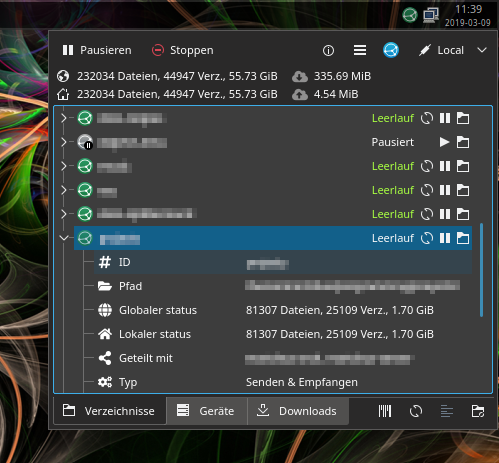 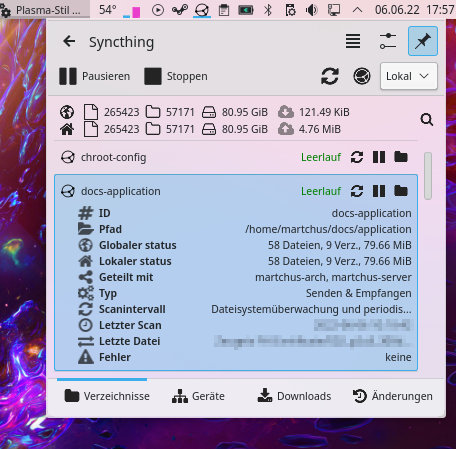 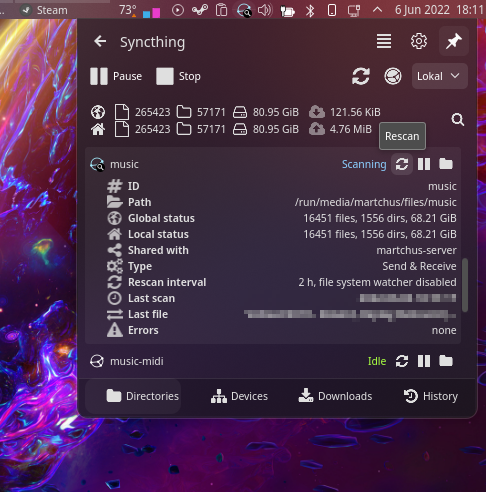 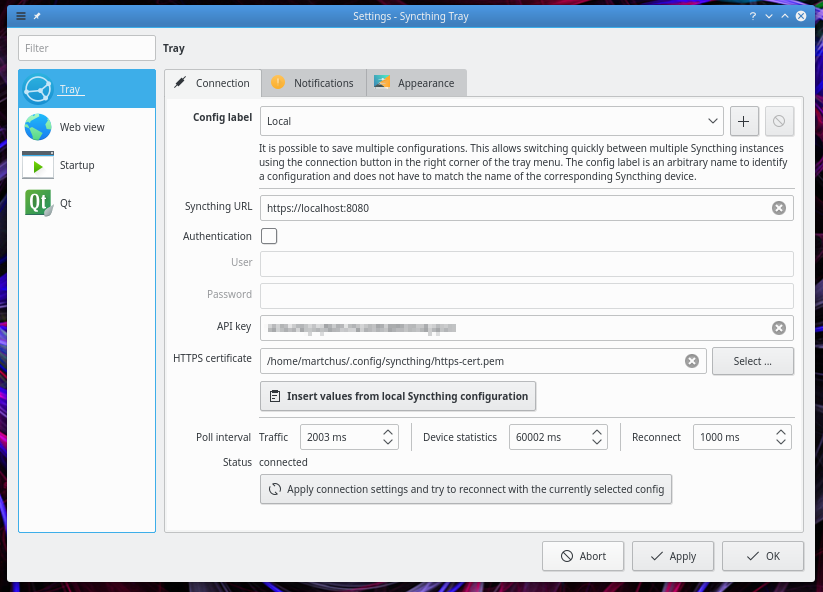 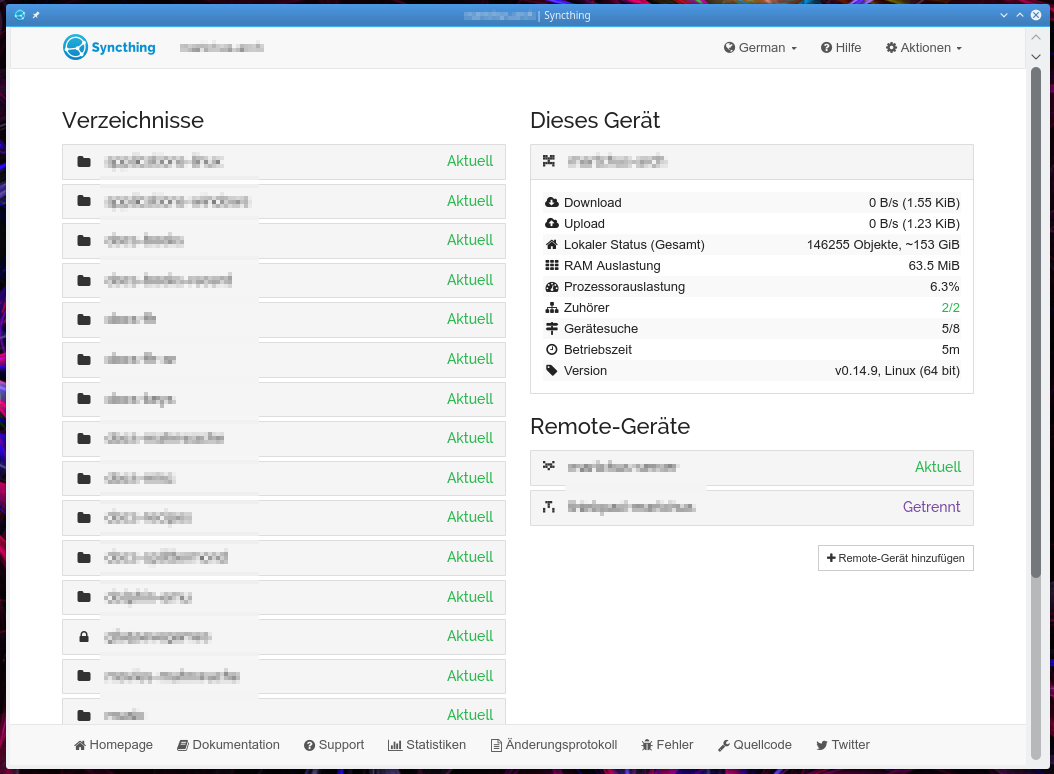 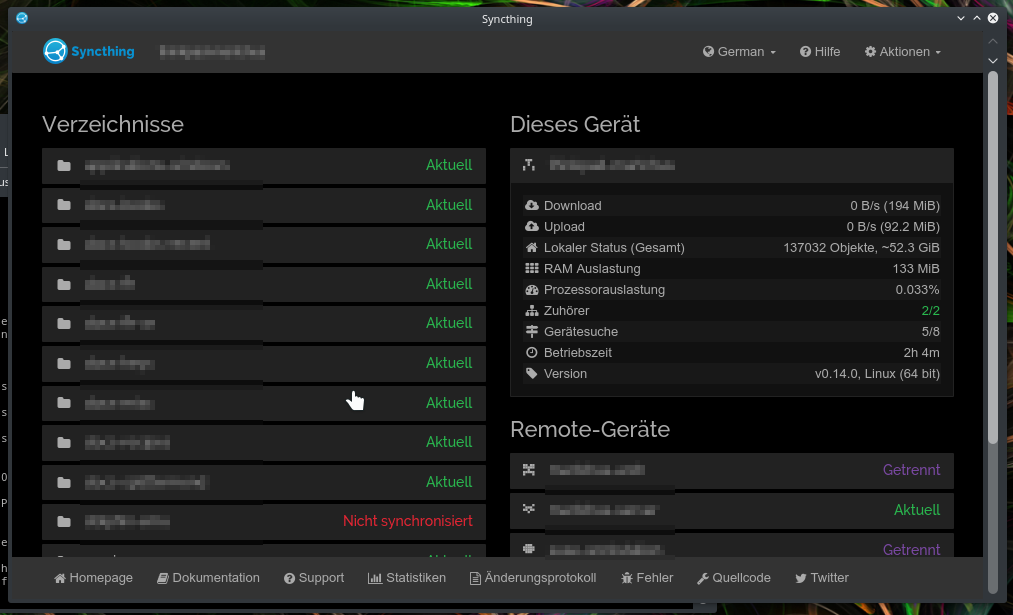 The next section explains what it is good for and how to use it. If it doesn't work on your system please read the subsequent sections as well before filing an issue.

With the system configured correctly and systemd support enabled at build-time the following features are available:

However, these features are optional. To use them they must be enabled in the settings dialog first.

Be aware that Syncthing Tray assumes by default that the systemd unit is a user unit. If you are using a regular system-wide unit (including those started with …@username) you need to enable the "System unit" checkbox in the settings. Note that starting and stopping the system-wide Syncthing unit requires authorization (systemd can ask through PolicyKit).

It seems that systemd's D-Bus service is only available when D-Bus itself is started via systemd. That is by default the case under Arch Linux and openSUSE and likely most other modern distributions where it is usually started via "socket activation" (e.g. /usr/lib/systemd/user/dbus.socket for the session D-Bus).

Note that the Plasma Wayland session screwed things up in the way I've described. This has been fixed with Only spawn dbus-run-session if there isn't a session already but this change might not be available on older distributions.

Note for distributors: There will be no hard dependency to systemd in any case. Distributions supporting alternative init systems do not need to provide differently configured versions of Syncthing Tray. Disabling the systemd integration is mainly intended for systems which do not use systemd at all (e.g. Windows and MacOS).

The built-in launcher can be accessed and configured within the settings dialog. The GUI should be self-explaining.

Use the same approach as for launching an arbitrary application via a hotkey. Make it invoke

See the release section on GitHub.

The application depends on c++utilities, qtutilities and qtforkawesome and is built the same way as these libraries. For basic instructions checkout the README file of c++utilities. For building this straight, see the section below. There's also documentation about various build variables which can be passed to CMake to influence the build.

It is recommended to use at least Qt 5.14 to avoid limitations in previous versions (see Known bugs section).

To build the plugin for Dolphin integration KIO is also required. Additionally, the Dolphin plugin requires Qt 5.8 or newer. To skip building the plugin, add -DNO_FILE_ITEM_ACTION_PLUGIN:BOOL=ON to the CMake arguments.

To build the Plasmoid for the Plasma 5 desktop, the Qt module QML and the KF5 module Plasma are required as well. Additionally, the Plasmoid requires Qt 5.12 or newer. To skip building the Plasmoid, add -DNO_PLASMOID:BOOL=ON to the CMake arguments.

The launcher uses these libraries by default to handle sub processes correctly (and avoid leftover processes). Add -DUSE_BOOST_PROCESS:BOOL:OFF to the CMake arguments to get rid of the dependency to Boost libraries. This disables handling sub processes and QProcess (from Qt Core) is used instead.

It is also possible to build only the CLI (syncthingctl) by adding -DNO_MODEL:BOOL=ON and -DNO_FILE_ITEM_ACTION_PLUGIN:BOOL=ON to the CMake arguments. Then only the Qt modules core, network and dbus are required.

To get rid of systemd support, add -DENABLE_SYSTEMD_SUPPORT_BY_DEFAULT to the CMake arguments. In this case the Qt module dbus is not required anymore. Note that there is no hard dependency to systemd in any case.

Building the testsuite requires CppUnit and Qt 5.8 or higher.

If the Dolphin integration or the Plasmoid don't work, check whether the files for those components have been installed in the right directories.

For instance, under Tumbleweed it looks like this for the Plasmoid:

The files for the Dolphin integration look like this under Tumbleweed:

The directory the *.so file needs to be installed to seems to differ from distribution to distribution. The right directory for your distribution can be queried from qmake using qmake-qt5 -query QT_INSTALL_PLUGINS. In doubt, just look where other Qt plugins are stored.

Actually the build system should be able to do that query automatically. It is also possible to specify the directory manually, e.g. for Tumbleweed one would add -DQT_PLUGIN_DIR=/usr/lib64/qt5/plugins to the CMake arguments.

If the Plasmoid still won't load, checkout the log of plasmashell/plasmoidviewer/plasmawindowed. Also consider using strace to find out at which paths the shell is looking for *.desktop and *.so files.

For a development setup of the KDE integration, continue reading the subsequent section.

Currently translations for English and German are available. Qt's built-in localization/translation framework is used under the hood.

Note that syncthingctl has not been internationalized yet so it supports only English.

Translations for further locales can be added quite easily:

The contained backend libraries (which provide connecting to Syncthing, data models and more) are written for internal use within the components contained by this repository.

Hence those libraries do not provide a stable ABI/API. If you like to use them to develop Syncthing integration or tooling with Qt and C++, it makes most sense to contribute it as an additional component directly to this repository. Then I will be able to take it into account when changing the API.

It is possible to turn on logging of the underlying library by setting environment variables:

The following bugs are caused by dependencies or limitations of certain platforms. For bugs of Syncthing Tray itself, checkout the issues on GitHub.

The Qt Widgets based version basically works under Wayland but there are positioning issues and the settings regarding positioning have no effect (see "List of bugs" section below). One can workaround this limitation by telling the window manager how to place the window, e.g. under Sway one could add a configuration like this:

The dark mode introduced in Windows 10 does not affect traditional desktop applications like Syncthing Tray. Unfortunately, Windows normal theming capabilities [have been removed](https://superuser.com/questions/949920/window-color-and-appearance- removed-in-win10). So far Qt does not offer much to improve the situation (see "List of bugs" below).

However, it is possible to use Syncthing Tray's custom appearance settings to achieve a dark theming:

After changing these settings, restart Syncthing Tray. It is not sufficient to close the last Windows; the process needs to be restarted.

It is also possible to enable Windows' "High contrast" setting which seems to bring back the traditional theming/coloring but unfortunately doesn't look very nice overall. Check https://github.com/tomasz1986/classic2000 to see how Windows looks like with high contrast applied, or if you're in need for themes that look at least nicer than what's shipped with Windows.

PMv2 is not working out of the box but experimental support can be enabled in the Qt 6 build by setting the environment variable QT_QPA_PLATFORM to windows:dpiawareness=3.